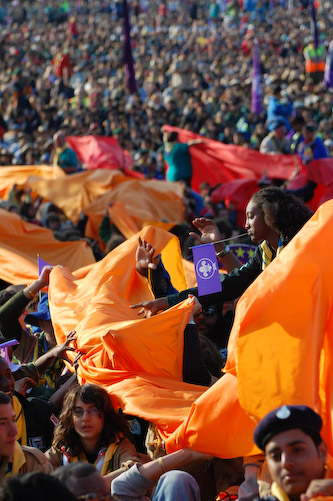 World Scout Jamborees are held every four years or so. Like the Olympics they have participants from all over the world. Between these there are often national or even continental jamborees. We joined a Cambridge district jamboree at Cherry Hinton Hall called Cherry Jam, for instance.

Preparations are underway for the Sweden World Scout Jamboree which will run for the first week of August 2011. Some of our scouts are lucky enough to have been chosen to represent UK scouting at the Jamboree at Rinkaby, Kristianstad near Målmo in Sweden

The 2007 World Scout Jamboree was held in Chelmsford, Essex in England and formed a key part of the Scouting Centenary celebrations with over 38,000 scouts, cubs, beavers and leaders in attendance.

Three members of the same family give their own view of what going to the Jamboree was like:

I went with my Dad and brother for a day because it was the biggest scouting thing in my life.

When we reached it the first thing that struck us was the range of nationalities that were there, 206 - just imagine.

Throughout the course of the day we saw various national tents and their representations of what they did in their countries. I was particularly impressed with Canada (Canoe and Moose), Algeria (traditional tent), Great Britain (Big Ben) and Sweden (a Swing Boat and the Ferris Wheel). We tried Greek bakalava and Hungarian poklot.

It was amazing how many sponsors we had and to get a Sainsburys on site was amazing. On our way round we read about all the ecological and life saving work scouts had done.

In 2011 I hope to go to Sweden for the next Jamboree as a participant. Moreover, I hope that I will be here in 2107 for the bicentenary.

We arrived early in the morning and were some of the first through an official tent then on to a bus that took us to the site. The queuing and paperwork disappeared into the æther with a bewildering display of flags that challenged my vexilological knowledge. At first, we had the site practically to ourselves with only a few wardens and other camp members about the site. After a swift tour around the sections of site (named after dangerous and remote terrain, volcano and ocean existed but not farmland or plains) we returned to the main area outside Hylands house.

A couple of the more impressive tents included the Japanese tent (ER 'most informative' award) the Icelandic tent (I shall never forget the representative’s flustered tone as he tried to explain the meaning of Rekkaskáter (16-18 year olds) [a difficult notion, sort of “step” scouts] to me) and the Danish tent with the Greenland extension (most mythological tent). Finishing off the day at four o’clock I had experienced a phenomenon not seen before: myriads of people linked not by religion or trade (there was very little of either on the site) but by common will and honour.

We arrived early so as to get on the first bus in; our neighbours in the car park were from Belgium.

On site the welcome at the gate was moving; the welcomes we received passing around the site the more pleasing for they included us day trippers in the whole.

And I have come away believing that this idea that touches all cultures is as powerful as it is local, what one person does for another, a world wide movement down our street.

The 2003 World Scout Jamboree was held at Sattahip, approximately 100 miles south of Bangkok in Thailand, in the first week of 2003.